you see this lovely girl picture, her name is Dian Sastro. let me start an intro in this post, While i was looking my viewstat at mybloglog.com community page. I notice there’s a visitor who come to this site looking for Dian Sastro and i said WTF. What wrong with google anyway?? there’s no posting at all at this web site saying any key word on “sastro” and i never put her picture too!! ..until this very day of course. i don’t understand why the hell is this happening, but i rank 10th anyway in the search results :D …and i thought i have seen everything… i saw this article on wiki while i was stumbling around last night before i go to sleep and suddenly awake seeing this articles, Man.. it’s freakin weird! 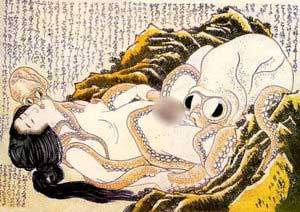 and this woodcut have a very intriguing name, it’s called “The Dream of the Fisherman’s Wife“. i bet there ‘s something wrong with the fisherman so his wife is seeing this octopus (two octopus actually :D ).