I just Receive Firefox Download Day Certificate :D. In just 24 Hours, Firefox 3 has been downloaded 8,002,530 times. U could see the Pledge Map on Spread Firefox site. 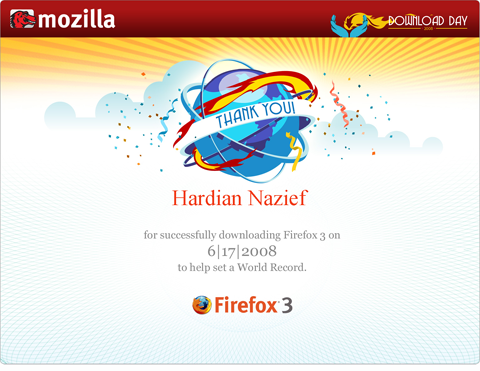 You’ve Pledged and Downloaded Firefox 3? U should receive email notification where u should download it in the email address that u’ve registered :) Cheers!

Just a quick reminder that today is Firefox Download Day!
if you want to make Firefox as The Most Software Downloaded in 24 Hours, you must download Firefox 3 before 17:00 UTC on June 18, 2008, or roughly 24 hours from now.

After that U could download Google Toolbar to go with it. u can’t go wrong with
.

Interested in making Firefox as The Most Software Downloaded in 24 Hours?
Firefox 3 is coming around this time of year and i’m sure participating this event will make big changes on people perspective on Firefox, as a person who use Firefox extensively i’m encouraging u to join Firefox 3 Download Day.

Well for those whose uncertain with the monstrosity features that Firefox offer is i can tell u this, if u decided to try, don’t just download the Firefox browser (even thought they have neat features), also installed them with thousand of useful plugins or add-ons.

Among the add-ons that i’ve installed is No-Script for the notoriously safe browsing and Stumbleupon for changing how u look the web.

if u’re uncertain with the thousands of add-ons that are available in the directory of firefox add-ons, well u can’t go wrong with
. With the immense feature of the toolbar itself i think u don’t really need to install another plugins (except stumbleupon of course :P )

So dont hesitate using Firefox and join in pledge in Firefox 3 Download Day!!

According to my google analytics there are 35% of my reader still using Internet Explorer, if u doesn’t convince with my statement, i’m sure there are 562527298 people who’ll be more convincing (data from Spread Firefox 2008 – 05 – 29). Just click the picture to join Download Day or click the Google Toolbar to get Firefox with toolbar