Couple days ago i had a lunch break at Platinum restaurant in Gajah Mada Plaza, Jakarta Barat. This is a franchise restaurant so expect mass product taste and middle to lower price range. Well i ordered a fried chicken with butter sauce. The taste isn’t good enough, not bad, but doesn’t good enough… The amount of of the food it’s enough for a one time lunch meal, not too much not too less. For a girl maybe it’s too much. i take a shoot the food there with my Canon A530. 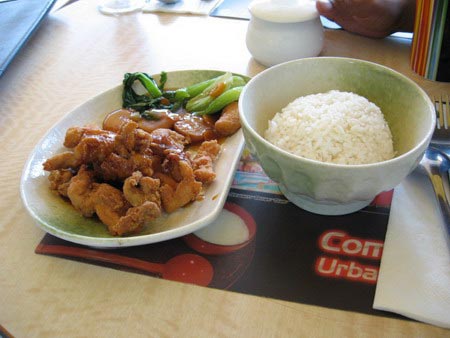 The reason why this menu doesn’t taste so good is because the chicken is quite stiff(cold) and the sauce IS NOT butter sauce but sweet sauce(kind of tomato sauce but more greasy). I thought with this amount of food would not fulfill my hunger, but actually it’s a large portion i tell u. oh yeah there’s a fried tofu(japan tofu) with it 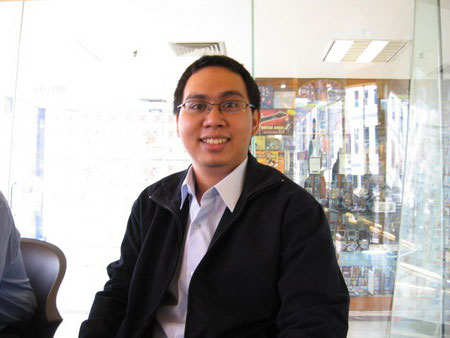 The second dishes that i see is what my friends ordered. the food is hainam rice chicken. I don’t know what it taste like, but i think it’s good, my friend always ordered that if we go to platinum on a lunch break. it’s quite a large dishes by the look of it. 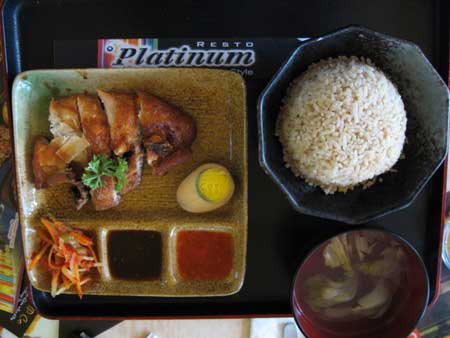 The third dishes is teriyaki combo, i think it’s not a teriyaki at all, it’s just a bunch of a fried sausage, slices meat and coleslaw with sweet sauce(like soy sauce but more light) on a hot plate. 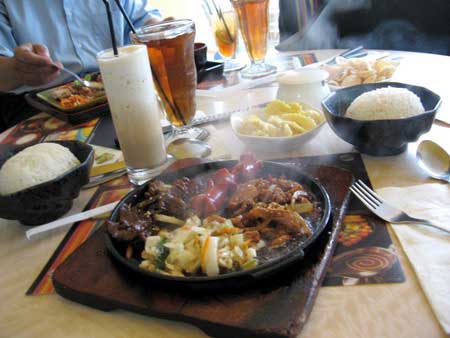 For fun with friends this restaurant its quite cheap and cozy, not too bad after all (it’s a boring place after 3rd visit). With three menu ordered, 3 glasses of lemon tea and 1 glass of cappuccino it’s roughly cost around Rp. 75.000 ( around US$ 8 ).

Since the 1st of february i was planning to buy a digital camera, not an expensive one as long as it have a nice megapixel and u have a lot of control in taking the picture,such as ISO control, flashlight, zooming etc. I’ve been surveying trough the web, and there’s a couple of things that u should know when u buy a digital camera(as a beginner). These things are:

I’m not a pro in photography but i do know what kind of good pictures look like, so i want to get a camera that was good enough to take picture of my friends and beloved ones. With this kind of simple knowledge i think it’s sufficient enough to buy a new camera without the hassle of understanding new technology.After surveying the web, i got 2 website that (to me) was qualified enough to get a decent review. the first one was the dpreviews.com and the other one i forgot to bookmark it :D is Imaging Resource. after read a lot of review i realize that i don’t have enough money to buy a good camera with anti shake features and large optical zoom. My budget was around US$150-250. Seeing my condition was lack of money i took chances to buy an entry class camera with a lot of manual control. My bet was on Canon and Olympus camera(Kodak: too much noise, Casio: no manual control, Sony cybershot: i rarely read reviews about Sony before so i dare not to buy it, Samsung: the entry class was horrible), both features a great experience in photoing ( forgive me for my lack of vocabulary :P ). 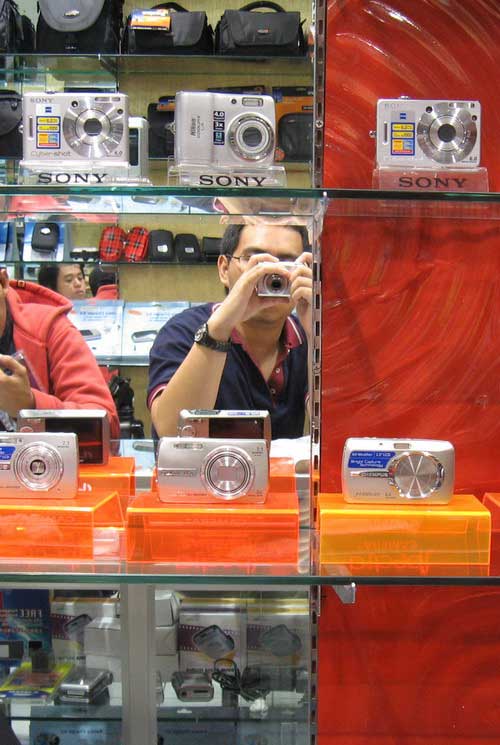 After testing the camera, Olympus(i forgot what type, around US$190) was great on the large LCD and the result of the picture(best antishake) but lack of viewfinder, expensive memory card(xdcard) and because of the large LCD means it’s goin to be short battery life. on Canon i tested 2 three type of camera A410 and A530, four actually but that was slightly out of my budget so i intensively tested the two type. The conclusion was that A410 was the cheapest one with the price range between US$110 and A530 is US$145, both feature the same technology with the A410 less features(doh’). the A530 was good (not great) on the result with auto setting, but sometimes quite blurry pictures and slow loading shutterspeed, using SD Card means cheaper photo storage. But alas with that kind of price range US$140 and almost the same features as A630, i bought(with original warranty) the damn thing :D . And not just that, i bought it with a package 1GB SD card and camera bag. hahaha so cheap!

this is a sample of the picture taking from my A530. My computer. 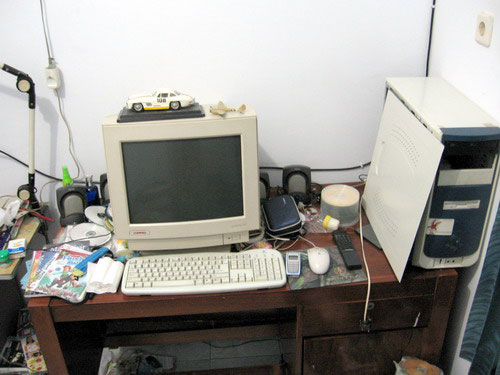 My friend who accompany me in buying the camera 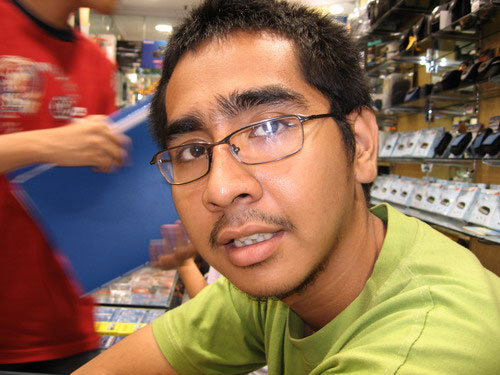 so that the story of my ventures in buying a good and cheap camera :D . good luck in finding yours!

The quality of the picture is quite good, often shaky(i wish i bought those olympus :( ) but the battery is killing me, it’s doesn’t get to 100 shot, already i had to buy a new battery. I don’t know why it need to change battery often, is it because i took a lot of picture or because i change the setting often

I bought a cheap rechargeable battery. right know it has a long span of battery life. after a lot of consideration, actually my camera is quite good comparing to all of my friends camera(2 Sony, 4 Kodak, 1 Samsung and 1 Olympus), it has the manual control that satisfy me for my hunger of controling. The auto setting act like shit in the result and don’t ever use the flashlight if u want a good picture quality. i shoot 1036 pictures since i bought this camera, it’s a fun experience in searching a right combination of color but i’m stil suck at searching angles.

A couple weeks ago i ate a fabulous lamb satay and Tongseng, it’s not too pricey but it taste really delicious for my indonesian taste, the meat was tender at the right point. in case u didn’t know, satay is pronounce sate in indonesia, just like when say pate.

When u eat satay u’ll goin to use some kind of sauce to eat it, u had to choice either u use black sweet soy sauce(kecap) or peanut sauce(use sweet soy sauce too but with peanut :D ). U could see the what satay look like, just see the current pic. 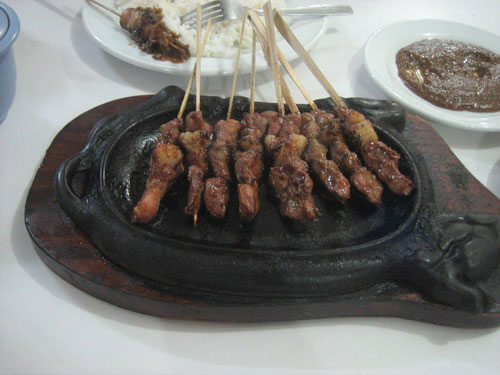 i also ate tongseng, it’s hard find an info about tongseng in the web, but this is a description to it that i can get.

A delicacy using mutton and it is called ‘Tongseng’. The mutton is boiled using charcoal.

it’s taste quite spicy and hot, with plate full of rice and tongseng will make ur stomach full :D . all of this food i ate comes with a total cost 48000 rupiah, it’s only about US $ 5. the place i ate is in “Sate Cirebon” at Rawamangun, Jakarta near Batak church 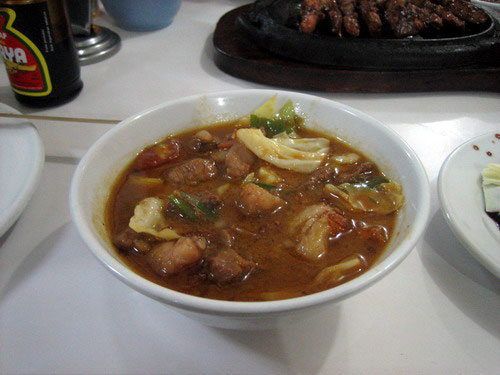 On January the 8Th, my website crash, and the database couldn’t be recovered. So i lost all of my writing…, well i could recover it, but I’m just too lazy to do it :P . It’s just 15-20 writings and I want to start a fresh new blog with new template off course. This kind of accident teach me that i should prepare backups of my writing once a week or more often. Well no pain no gain.

First of all I’d like to compile all writing i read about googling as a reminder for my self. there’s a couple web site that help me a lot on this writing, all of them l’ll wrote it in the last paragraph in this writing.
Usually in websites there’s a directory that are open in public. not all of them but a lots of them usually store interesting film, music or even books. In this directory there’s a generated note that this is an open directory when u open it and contain a list of files in that current directory. yada yada yada…so if u want to check it it use this query or just click it:

With the above google query it’ll show all open query, but if u want to connect it with some topic or some person, let say Jessica Simpson, just added in the back of the query so it will become like this:

it could be shown if there’s any files that are being named Jessica Simpson. The naming convention could be different inevery place so try your luck. if u want more specific type of file, like a video or an mp3 of jessica simpson just add mp3 or avi.

in case u want an ebook like Da Vinci Code u could use this query, with a lot of type of ebook.

Most of this writing i get from Google Tutor, u could look the popular writing of this site is Voyeur-Heaven, all about Google search in here and Google Tutorâ€™s Google Search Manual. Others sources are from googleguide.com about the advance operators. There’s an official help center also, u could look it up in Google Web Search Features, The Essentials of Google Search and Google Advanced Operators.
Actually the first time i learn about google hack is when i read an article from johnny ihackstuff, he wrote a wonderfull articles on google hack, about getting a credit card number and get almost everything that are available in the web. That a long time ago, right know he bundled the articles bout google into Google Hacking Database (GHDB) .

…or the easiest way to search MP3 or e-books, u could use G2P, website that use Google hacking to locate MP3s.