That’s what happen to me when i play Tetris DS, the game again been poisoning my mind for two month now.

It’s started when i was organizing my desk and found Tetris DS box, at that moment i was almost bored to death with my Nintendo DS, since Final Fantasy IV i haven’t found any game that interesting enough for me. Then after i played this game again, i play it over and over every time i have spare time. 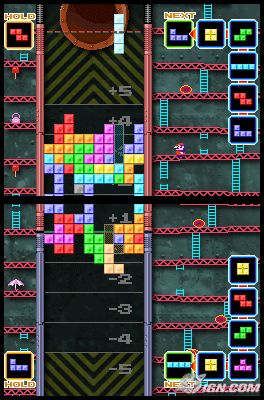 you see this screenshot? because of this, this past few week when i’m tired of reading and working, i daydream hearing and visualizing those damned Tetris block dropping away :D

this is just one of game mode that was in Tetris DS, there’s 5 more that could be addicted like this. Imagine, a game as simple as this could be so addicting. There’s other game that’s similiar like this, Meteos, but i forgot where do i put the game box. But Meteos only have one mode to play, Tetris DS have 6.

If that’s not the sign of a game that filled with awesomeness, then what is?

3 thoughts on “I Dream of Tetris”